Today was St. Kitts. Last time we (well Jess and I) were here was 1999 on our honeymoon. The people have not changed, still friendly and helpful, quick with smile and a wave. 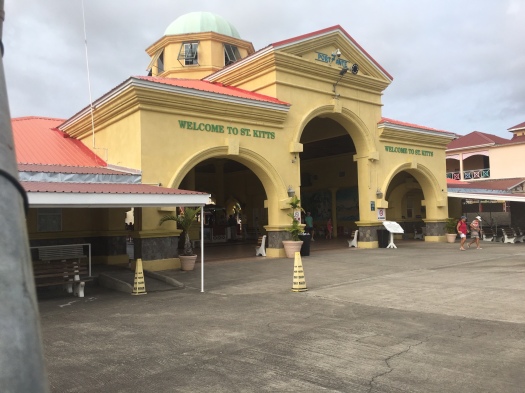 GMan and I did the Mount Liamuiga volcano hike. 6 mile up and down, which starts at 700 feet and goes up to a bit over 2000.

Once again the cattle mart mentally was evident when disembarking. Apparently another ship showed up right at the wrong time (for us that is) and we did the hurry up and wait. As you can see below the pier is quite narrow so dropping lines off the other ship would be very hazardous to anyone below.

We got sorted into our groups and off we headed. Once there the entire group was split into three, with 16 or so in each. We chose the second group off, the so called not so active but in 1/2 decent shape group. Within 15 minutes we passed a few people from group one that should have gone with group three, or possibly waited for the helicopter. I spotted flip-flops on one…not exactly hiking wear…even for the most mellow walk in the woods. 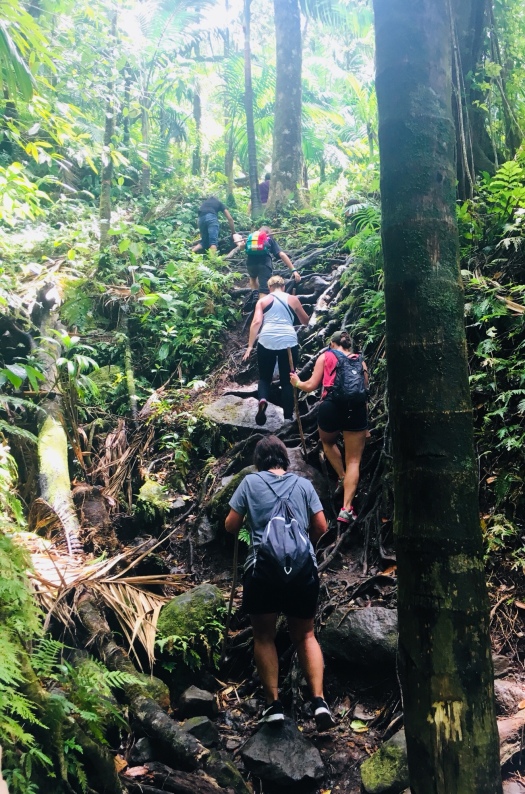 The about was about 1/2 way up. It was hand and foot for a bit and it was also raining, which provided much needed relief, but made everything really slick. Basically 3/4 the hike was the below, thick tropical forest with a ribbon of well trodden dirt running through it.

Our guide Paul, typically leads group one but, and these are his words, “the boss man wanted one of the young dreds to lead today” so he was #2. Paul has me by about 10 years and normally does the hike twice per day and he pace is very fast. I knew it was a race to the top as he took off like a hare at Wonderland. Occasionally he glance over his shoulder and access the line of hikers.

He has a great spirit about him and told all manner stories and interesting information on what you can eat and make with things found in a rain forest. Did I mention he normally climbs this mountain twice per day……..in cut off rain boots, or as we’d say across the pond, Wellington Boots! Now I’m no hiking expert but I do know my way up and down a few trails, and I did send my youth on a farm in wellies (that’s short for Wellington Boot incase you missed the connection). They may be very waterproof but offer zero ankle support and make your feet sweat like the dickens. So why is a lad that hikes for a living in cut off wellies? I don’t have the answer, nor did I ask, but I’m sure you can figure it out, or come up with a list of reasons. Whatever the case I did tip well as he’s a wonderful guide.

By the way, the above photo was on the way down and it’s a snip from a video where Paul swung like Tarzan from the vines in background. He was just as engaging and animated as he was when I first met him.

There were six rest breaks on the way up and none on the way down, well….Paul paused long enough on the way down to see the last hiker and them took off like a blue ass fly who just spotted an open jam jar. The up hill breaks got shorted in time as the climbing got harder. 30 minutes for the first, down to 8 minutes on the last.

The above is also at the top. The mountain in the distance is the other side of the volcanic rim, we were are on one side looking at the other. 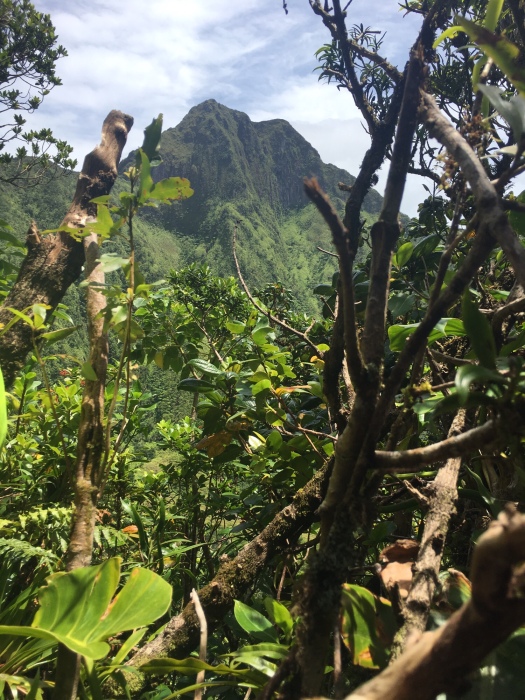 Few minutes later and it getting a little clearer. Finally at the top the below is what you see. Simple spectacular and a little scary as all that’s between you and a very long drop is a few feet of dirt.

The following images are from right before and right at (our) summit. You can continue on another 3000 feet if you like, but our hike ended here. Good job as my legs were jello and we still needed to go down.

After a quick break…you guessed it, Paul said “Ya man….time to head down“. I fell in line right after Paul and GMan behind me. I reckon if I stick with him I could follow his line….you know that twice a day thing can only help. I’ll admin it’s was work to keep the pace, but we motored on at a good clip.

We passed some interesting trees and the below “tent tree” as Paul called it was a really neat one. Since we were well ahead of the pack he said “go on down man and I take your picture“.

Here’s another cool tree we spotted.

At the bottom we had lunch….the first crew down had set up the buffet line. Here’s the order, drop your walking stick in the pile, put your hand out and someone poured water on them so you could wast off the mountain, in the first of 4 tubber-wear containers you got two pieces of white bread that conveniently always had cheese on one. Next was the deli meat, either turkey of ham, then tomatoes and finally lettuce. At the end of the truck trail gate buffet was the lemonade, take a glass, fill her up and chow down. One could also buy a Carid beer for $2 but you already know my opinion on this subject. However, if you missed it see yesterdays post. Let me tell you after that hike it was a good sandwich. Mind you we snacked among the way but we all know what that meal at bottom tastes like.

All in all it was a great hike and perhaps some day we’ll make it back and do the addition 3K.

On the way back to our ship I spotted a boat yard….well more a boat field. Instead of traditional boat stands all they did was dig a trench for the keel and rudder and sit the hull on some tiers with every thing from the waterline down in ground. Some were secured down with straps and stakes driven into the ground. Basically it looked with a field that is growing many types of boats. 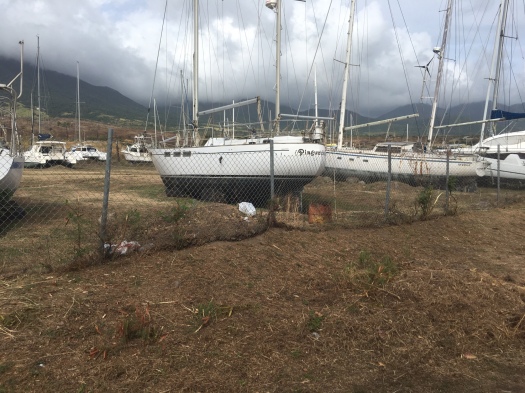 Back in port I snapped the following of our ship (right) and the one that made us wait this am. Our neighbors boat looks bigger but I found out later that it’s not even close. Kinda like a Honda Civic with a huge rear spoiler….all fluff, but no go.

And one more for good measure.