Growing up in Ireland guns were simply a part of life. From a very young age I was exposed to them and had an very good understanding of what happens when you pull the trigger, ” the thing you’re pointing the muzzle end at is either dead or hurting”. Seem simply enough but I think it’s lost on kids these days due to video games and tv.

My dad had one rule with his gun “don’t touch it without him, ever”. The gun stood in the corner of our coat closet in the front hall with no trigger lock. The cartridges were in a big bowl (along with all the other stuff we left alone) on top of the cabinet in the very same coat closet. The cleaning rod stood next to the gun and I can still smell that mixture of gun powder and 3 in 1 oil! Nothing fancy for Jimmy….shoot supper, run a few rags through the barrel, oil it and stand it back in the corner.

It was a 12 gauge pump action plugged down to only allow 3 in tube and one in the chamber. It had the letters MF on the underside of the stock. I have no idea where he bought it or what it cost, but it had smooth action, looked great and would stop anything he hit out to 60 yards. Overall I only remember his missing the odd shot, but I sure he had a few flyers!

My first shot was on Hare Island, Lough Ree. It was a nice summer day and we (Dad, brother MQ and myself) were on a typical Sunday fishing trip, but Jimmy also brought the gun that day. He usually didn’t mix fishing and hunting but this day he did. The fishing was bad so we pulled into Hare Island to have lunch. The usual chicken sandwiches with cans of Coke, followed up with a candy bar. A blind person could shoot a hare on the island as they were practically falling over themselves. You know what they say about rabbits, well it’s the same thing for hares. Jimmy wouldn’t waste a cartridge on a hare as he referred to them as a bag of bones that run around and as such not worth eating. After lunch Jimmy suggested a little target practice on the empty cans. I jumped at the chance and we set up the cans about 20 feet away. I can’t remember if I or my brother went first but I was itching to blast one off. After watching Jimmy for years shooting I was more than ready. He chambered one, put the safety on and handed me the gun. He keep one hand on the fore stock and instructed me to point the muzzle in the direction of the can at all times and told my brother to stand well behind us, but off to one side to watch the action. Then he released his grip and joined my brother, all the while reminding me where I needed to point it.

I handled the gun before but never loaded and never shouldered. At twelve years old this thing was heavy and really hard to keep on target. I floundered around for a few seconds, which felt more like an eternity, closed my eyes at yanked back on the trigger……..Nothing happened. My first reaction was I broke the gun, then Jimmy asked if I took off the safety? Safety I thought, now I remember. Trying to look cool I announced that I was just practicing! Not sure if anyone bought it but it worked for me.

Round two, well one with no safety. I shouldered the gun again, flipped off the safety, found the can in the front sight, held my breath, closed my eyes and again yanked back on the trigger. Keep in mind I was only twelve and this was a 12 gauge with something north of a trap round, not wearing safety glass or ear plug. Only trap guy wore ears and that was only rich farmers. No one wore eyes….ever. To date it was the loudest sound I ever heard or made. The first thing the hit me was the noise. It’s must louder when you’re shooting. Then came the pain, lots of pain. Not sure my shoulder was still attached to my body and my entire forearm was screaming. The next thing I realized was I was trying to keep my balance as my entire body was moving backward at vast speeds. I remember thinking if I drop the gun Jimmy will have my life but I was far too busy trying to stop myself from moving, all the while wondering if I hit the can and how sore will I be in the morning, regardless of me dropping the gun or not. A few nano seconds later I came to a stop, still standing mind you, with the gun in my left hand. I forget to mention that I’m right handed but clearly the recoil removed my right hand grip. Jimmy reached in and scooped the gun out of my left hand and said well done you hit the can.

A few seconds later after the shock passed we walked up to the can to inspect the carnage. I fully expected the can would be damaged beyond recognition. My assumption was backed up by the fact that the can flew a great distance after I hit it. It had fallen between some rocks so I had to reach down to retrieve it. The moment of truth was here and it was a disappointing one. I nailed it alright, three pellets in total had hit the top edge. Another 1/2″ and I would have missed. Chances are I may have actually shoot a few fish in the lake! So the bragging right were not going to be as much as I wanted but I keep that can for years and showed everyone I knew and my black/blue shoulder and arm. I’m not sure I entered manhood that day but I certainly checked off a box or two.

Many many years later I bought a Smith + Wesson Model 41. Go here for more information. Mine has a 7″ barrel, red dot and custom grips. I did a fair amount of research prior to buying and found a well cared for used one in Cabelas Scarborough Maine store. What nailed it for me was test firing a friends Ruger .22 (thanks BR). I had not plinked in years and here was a way to get to the range, have a blast, and do it for very little money. Once you get over the hump of buying a pistol you can get a box of 500 rounds for $22! So for $10 or so you can have a lot of fun.

The M41 is the most accurate pistol I have ever fired and its possibly better than I’ll ever be. Grip, hold, and finding the target are all smooth, natural and repeatable. Clearly a good stance is required in Bulleye shooting but it really helps if you have great gun.

I’m not sure what the trigger pull is but is breaks wonderfully and assuming I don’t heel or make another mistake my shots should be in the black. Lately during practice I find myself concentrating more and more on actually pulling the trigger, which may sound odd, but it’s very important. It’s almost impossible to feel the difference in it, however, what’s going down range is much more likely to be favorable if you do.

Week over week my scores are improving but practice is key and finding more time is hard. I very happy I can get down once per week. Also, since originally posting this I made the pistol team. This fall and winter I’ll be shooting with my clubs indoor pistol league. 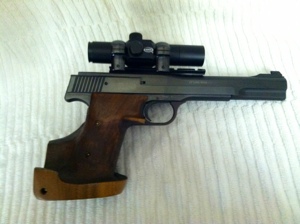 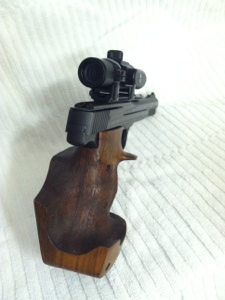 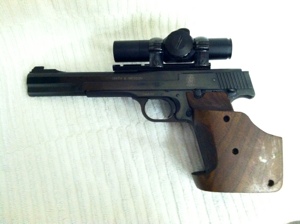 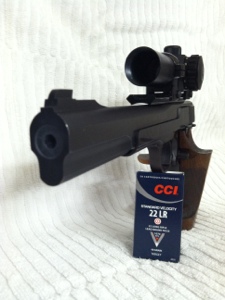 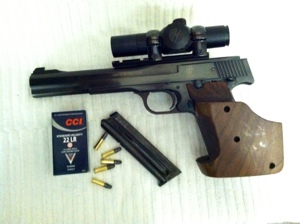